Over the past few seasons we have seen a tremendous growth in the amount of couturiers that originate from the Arab World and they are taking over. We can notice this trend by looking at the stars and what they chose to wear at two important red carpet events that took place a few days ago – The Emmys and The VMA Awards. And the media has been buzzing Julia Roberts made such a statement wearing a short dress by Elie Saab, J.Lo who just turned 45 showed off her incredible body in a Charbel Zoe dress. While Beyonce not only wore one, but two different dresses by Arab designers during the VMAs – a black dress by Nicolas Jebran and a red one by Zuhair Murad. Meanwhile, Alexandra Dabbario revived old Hollywood glamour in Reem Acra.

When Kelly Rowland – a big fan of Arab designers- was asked by Style Arabia about her preference for Arab aesthetics and Arab designers such as Rani Zakhem, Rami Al Ali, Elie Saab, Georges Hobeika, and Georges Chakra, as well as,  Azzedine Alaïa.  Rowland’s stylist replied:

“We absolutely love Middle Eastern designers,” noted Dash. “Alaïa, Georges Chakra, and Elie Saab are a few of our favorites. It’s that Arabian allure. They incorporate so much value and culture into their clothes, which Kelly especially loves.”

Dash (Rowland’s Stylist” later added: “What fascinates us most about Middle Eastern designers has to be the way they externally channel so much creativity into looks for the runways. How their minds are so limitless. They’ve added so much to the Western fashion scene – with the most obvious being the turban, caftan, and hareem pant, which Kelly loved wearing during 2011-2012”

Here are some images from the runway, click to enlarge. 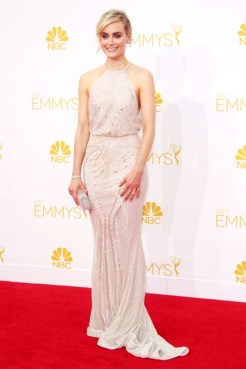 So a few days ago we watched as celebrities and fashion designers walked down the red carpet for one of the most important events of the year, The Met Gala. As always Anna Wintour’s themed charity event always attracts the wealthy and the famous and we cant help ourselves but analyze and decompose every single outfit after all the event was held by one of fashion’s most important figures, if not the most important person of them all. We all may have been at awe with some of the outfits, but to me I really appreciate people who do stick to the theme of the party. So lets see who stuck to the theme the most?

As we all may know the theme for the gala was ‘White Tie and Decorations’ in coordination with the new Met exhibition dedicated to Charles James, which is nicknamed “the first American couturier”. Not many may know Charles James’ legacy but if anyone has ever worn down jacket, a wrap dress, or the strapless gown—all of those were his innovations.In 1932 he also creates a “Taxi” dress which its said it is so easy to wear that it can be worn in the back of a taxi. Below you will find images of his creations and how he inspires many designers today. You can see how he has influenced Marchesa and Zac Posen. Here are some of his designs:

But now lets see how the celebrities went to this event last night! Some may not have sticked to the theme but we can never stop appreciating a beautiful dress. I am loving Dita Von Teese’s Zac Posen dress!

All pictures above were taken from metmuseum.org, vogue.com, Getty Images, EPA, & Reuters.